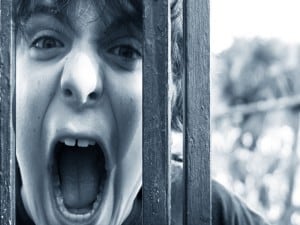 There has been a lot of negativity and narrow mindedness in the media recently regarding ADHD, kids/ people with disabilities and mental illness. People can be so judgmental of those less fortunate than themselves, without first thinking of what the person they are judging are actually like or why they are the way they are.

Is it from misinformation or lack of education in society? Or are people just becoming more judgemental/ negative about others in general? Whatever the reason, it isn’t right and shouldn’t be the accepted normality. So I am going to tell my story and hope it can shed some light on what living with a child with ADHD is like.
I have two special needs children. Josh (16) has ADHD. Thomas (9) has Aspergers Syndrome, which I have previously written about here.
As a toddler, Josh was always getting into everything and had to be constantly occupied or he would be into something he shouldn’t of been. And before you say “Oh but that is usual for a boy to be like that”, yes it is but Josh was to the extreme! He would climb anything and everything, he would have meltdowns constantly, he couldn’t sit still, he would constantly cry on road trips for being restrained in his car seat…. the list is endless. I had to have everything locked or hidden. I had to watch him when he was playing out the back as he would scale 6 foot fences!
I remember one day, I was having a shower and came out to find him gone. The little bugger had moved the chair over to the front door and undone a chain bolt and a deadlocked door… I could not find him anywhere. Remember this is a 2 year old child! I was frantic… after walking down the street and trying to find him, I went home and called the police and explained what had happened. I felt like the worst mother ever. I walked down the street again to find Mr, happily walking back home with the owner of our local milkbar. Lucky he knew us and luckily we lived in a relatively quiet area. I would hate to think what would have happened if we lived in a busy area. Being a sole parent, working part time, and doing a business degree with a child with ADHD wasn’t easy. I really thought and was terrified the police would of contacted DOCS about that incident. What is the saying ‘That is sent to test us, only makes us stronger’ is so true. I think I am a better person for having dealt with what I have over the years.
Mind you, until Josh was 6 or 7 I had thought it was just ‘normal’ boy behaviour and he was just a ‘difficult’ child. It wasn’t until Thomas was moving into toddlerdom (and I was looking for answers on why he was the way he was) that I realised Josh had characteristics of a child with ADHD in Dr Christopher Green’s book, Toddler Taming. At this stage, Josh was a lot worse and having regular meltdowns and not doing well at school. We had holes and marks on the walls from his temper. I took Josh to our GP to obtain a referral to a pediatrician. Contrary to popular belief, ADHD is not as easily diagnosed as the media make it out to be. Most pediatricians will rigorously test the child before they make a full diagnosis.  I had to fill out a 5 page questionnaire which had 200+ questions on it and I had to rate each statement on a level of 1-10. Josh had a few trips to a psychologist for testing and only then did we get a diagnosis… 6 months later. It was a hard decision to make whether we put Josh on Ritalin at 6/7 years of age but I am so glad we did. It was hard initially because he was on the short acting tablets, which he had to have twice a day. Once it was shown to be effective, he was put on the long acting Ritalin and then eventually Concerta (which has less side effects than the Ritalin LA). We copped a lot of negativity from family about putting him on medication but once they saw what a difference it had made they soon changed their tune.
ADHD medication will not work on a child/ person who doesn’t have ADHD. It will actually have the opposite effect on them, which I have always found intriguing. How could a drug with speed in it actually calm a person with ADHD down but hype a person without ADHD up? I guess it is because of the chemical make up of the brain of someone with ADHD.
Having watched the ACA story on Tuesday night, I was appalled by how narrow minded people are. You cannot say a child with ADHD is ‘just a naughty child’ and lacks discipline (which a lot of people see children with behavioural problems as being). It is incredibly difficult to discipline a child when they are having a meltdown, as the child isn’t in the right ‘frame of mind’ to listen to you.  They are essentially in their own world at that point of time and no yelling, smacking or reasoning will change that. If anything, it makes them worse. I was appalled by one mothers family who had threatened to call DOCS because the mother had put her ADHD son on medication. There is still so much stigma around regarding ADHD. I’m glad ACA raised awareness and medication is required and helps a great deal of ADHD diagnosed kids regardless of the opposing arguments in the story.

FACTS:
ADHD is a neurological disorder, where a certain part of the brain doesn’t function the way a ‘normal’ brain would. It is also caused by a chemical imbalance in the brain, much like a person with depression has .
It is NOT caused by ‘bad eating habits’, ‘bad parenting’ or environmental factors (such as BPAs, immunisations, having used phenergan as a baby (Josh’s father said that is why Josh has ADHD.. as I used phenergan when Josh was teething as a toddler… idiot!), not being breastfed etc. ADHD is something someone is born with.
Kids with ADHD usually grow up to do more ‘hands on’ type of work and learn by ‘doing’ rather than being shown what to do.

I truly believe that if we hadn’t medicated Josh, he would of turned out to be a totally different person to who he is now. Josh has turned out to be a well mannered, hard working, sensible young man who I am incredibly proud of. He starts an apprenticeship to become a chef next month. I am so happy he has found his ‘niche’ and what he wants to do with his life (which I had no idea of what I wanted to do at 16 years of age). Josh has been off his medication since Christmas. Now that he is older, he can control his actions and because he has a more hands on role, he can channel his excess energy into that. His pediatrician actually told us when he was little, when he got to this age and was doing what he wanted to do he wouldn’t need his medication and he was right. His ADHD was exacerbated by being in a classroom for hours on end and being bored from not being interested in what he was being taught/ doing. Of course, when he got home it all the frustrations/ hyperactivity came out then and that’s when we had to deal with it. Plus his meds only lasted 6- 8 hours, just enough to settle him at school. So we had a double whammy when he was home. At the worst point we had to give him a short acting Ritalin to calm him for a few hours after school, in which time I would take him outside so he could ‘let off steam’, so to speak before the meds wore off again and he could go to bed.
So there is our story. Before you judge a parent or a child with ADHD, think before you say something. There is always a story behind everyone and every situation.

Your Essential Checklist For Moving Home