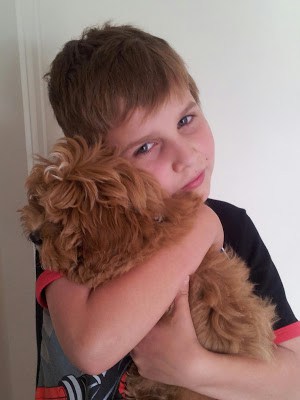 The last time I wrote about Mr T and his Asperger’s, he was seven years old. It is now three and a half years later and he is still the sweetest, most loving eleven year old there is… OK, I might be slightly biased but everyone says he is. On the 28th March, Mr T turned eleven and he is in year/ grade 5.
In the past year we have had a few hiccups, like his anxiety becoming  so bad he worries himself sick…literally. Particularly if we are going somewhere he hasn’t been before or where he knows there will be a lot of noise and people. The anxiety depends on the day he has had as well.
His obsession with his ipod and my trying to minimise the time he spends on it (Aspies tend to become obsessed/overly attached to a certain item/idea) has been an issue as well and the cause of a few meltdowns.
Mr T was a really good sleeper and quite an easy child to get to bed. Now I have to give him Brauer’s Children’s Sleep or Children’s Calm to get him to sleep (if your child has an upset stomach, you can’t go past the Brauer’s Stomach Calm. The Brauer’s range is fantastic stuff!). If the Brauer’s medicine doesn’t work and he still can’t sleep, then I give him Phenergan as a last resort.
Mr T’s brain seems to be in overdrive lately and he can’t shut it off. The doctor has told us to limit his use of all electronic equipment at least an hour before bed. I have made a deal with him, if he goes to bed at 8pm, he can read a book until 8.30pm then it’s lights out. It seems to be helping and he is getting into reading more, which is great.
Other than those things, he seems to be going ok at school and he has his friends, which is a huge thing with Aspies. He is quite an intelligent boy, I wonder some times if he is hiding how smart he is to fit in with the other kids. We had trouble at the end of last year because some kids were calling him ‘dumb’, which upset me a lot because it couldn’t be further than the truth. I told him not to worry about it and that they were just jealous of him.
As it is, I am not happy with the school. Mr T was put in a class without any of his fiends this year, so you can imagine the trouble I had at the start of the year. Mr T was so upset. I felt awful for him and I knew exactly how he felt because I had been through the same thing as a child. You really don’t want the bad things that happened to you as a child happening to your children. He was a complete mess and very hard to console. The principal came out to see us and she had absolutely no idea what to do with him. She summoned Mr T’s best friend out of his class, which his poor friend had to no idea what was going on and should never had been put in that position. Obviously that didn’t settle Mr T, so the vice principal was called to help out. Thankfully, he knew how to deal with Mr T, much to my relief, so much so that I became teary in his office and burst into tears as soon as I got in my car.
This sort of thing has been happening from when Mr T started in grade Prep. I feel like I am banging my head on a brick wall most of the time trying to get any sort of assistance for Mr T through the school. I can see him slipping through the cracks. I know the teacher needs to gain Mr T’s interest in what he is teaching but with over 20 other kids in the class room, it is hard for the teacher to dedicate any time to him.
We can ask for Mr T to be reassessed for assistance with his education, even for a few hours a week one on one with a teachers aide would be great for him but again, would he be subjected to other kids teasing him because of it? We had the assessment done when he was in grade one and we were knocked back because he was deemed ‘not bad enough’. Maybe things are different now because Asperger’s Syndrome has been included in the Autism Spectrum Disorder stream he may be able to obtain some assistance, who knows.
It has gotten to a point where I have had enough and we are looking at other schools, so we can get him sorted and hopefully, receive a better education before he hits secondary school. We held off because for a few years his teachers were quite switched on to Asperger’s and how to deal with an Aspie in the classroom. We also didn’t think pulling him away from his best friend and other friends would help him either but now we need to focus on his education because he has learnt social skills to an extent that he could probably make friends fairly easily now, whereas before he wouldn’t have been able to. It’s really hard, at times you feel and believe there is nothing ‘wrong’ with him and you get into a mind set of ‘he’ll be fine, he is doing ok” but deep down you know that as a parent you could be doing better.

Mr T is also due back at his pediatricians soon and probably back to his child psychologist to sort out his anxiety. I dread going to appointments and hearing about what is wrong with your child as you feel like it is your fault your child is the way they are, even know you know that it isn’t.
You get to a stage where you don’t want to hear anything else because it really upsets you and as I said, you feel like it’s your fault, so you avoid these appointments or put them off so you don’t have to deal with feeling like the worst parent in the world and like you have failed your child.
It is easier to be in denial and pretend that nothing is ‘wrong’ with them. I know it isn’t right and I do everything I can to help him with his school work and social skills, I just don’t want to hear it from a professional about what is ‘wrong’ with my child.

I am also getting pressure to go back into the work force because even though I do ok working for myself, chasing invoices and waiting for them to be paid puts a strain on things financially, especially when people don’t pay or delay paying me.
The problem with going back to work is the fact that Mr T missed 60 days of school last year due to illness. Kids with Aspergers have a low immunity and low pain threshold and hence, the missed days of school. What employer is going to put up with me taking time off work all the time? That is without having go to the school for meltdowns etc. Not to mention the days his younger brother was off from school sick as well. Not to mention Mr T wouldn’t cope with before and after school care and holiday care. The cost of putting them both in care, parking, petrol etc would actually set me back financially rather than working for myself. It’s ridiculous! *sigh* So I’m in a bit of a quandary and stuck between a rock and a hard place. I’m not sure what to do.

April is Autism Awareness month and the 2nd of April is the United Nations World Autism Awareness Day. Sydney Oprah house will be lit up blue for Autism Day and you can wear blue to support the day (information below).
Please support your local Autism organisation and support those with Autism or families with children with Autism. Don’t judge them, they are doing the best they can.

Awesome Ways to Live a Celebrity-Like Lifestyle Right Away

Have You Been Injured? Here’s A Few Tips On How To Get Help