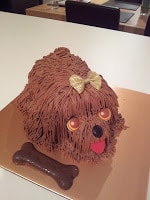 The week started off earnestly enough, a lot of work accomplished on the Monday and I was excited by my birthday being the next day. Lunch was from BreadTop.
(if you have never been into one of their stores, then you are missing out! Carb overload!!).
The boys bought me the gorgeous dog cake (right). How cute is it? And it was delicious! Chocolate and chocolate mousse inside and chocolate mousse as the dogs fur. As the boys were getting picked up from school by their father the next day, the boys gave me their cards and birthday presents. Sussan Gift cards… yay! My birthday (28th Aug) was spent working.


My darling partner took me to The Langham Melbourne hotel’s, Melba restaurant for dinner. The food was amazing and the view overlooking Melbourne and the Yarra river were just spectacular.
My birthday joy was short lived with a call from my step dad/Mum’s partner, telling me that Mum was back in hospital with love blood counts and they had to give her two bags of blood via a transfusion. 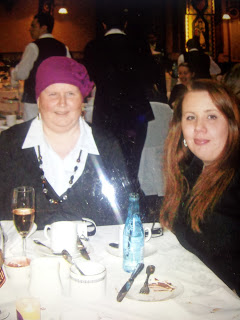 The next day, I was called to say Mum had not picked up and I had better head down to Orbost (5 hour drive from Melbourne). Luckily, the boy’s Dad had two weeks off and could take them while I went down. So the children and cat were organised, I threw some clothes in my Guess suitcase and headed down south, via the city to pick up my partner. The next few days were spent next to Mum in hospital, holding her hand and talking to her. Probably the worst experience of a person’s life is watching one’s parent struggling to breath and being ‘out of it’ on Dexmedetomidine and Morphine. I don’t think I would have coped with it all if it hadn’t of been for my wonderful partner, Duncan and my Mum’s cousin (who was like Mum’s sister, Sue). They were both fantastic.
By Sunday morning (Father’s Day), Mum was a lot worse and we were told Mum didn’t have long and we should say our goodbyes. Probably the hardest thing I have ever had to do. So I told her how much the boys and I loved and cherished her. Not long afterwards, at 1pm on Sunday the 2nd of September, my lovely gorgeous mother took her last breath. It’s a weird thing seeing someone die, the person looks so peaceful and asleep, you think they are still there but you know they are ‘gone’. I just wished I could have woken her up and everything would have been ok again. No more cancer or pain, just my lovely, kind hearted Mum sharing a joke and a hug with us all but unfortunately that was far from reality. I stroked Mums hair kissed her, told her I loved her and that was the last time I would ever see her again. 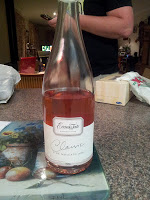 Boxes of tissues and a bottle of Evans & Tate pink Moscato (my favourite) were required that night. The next few days were a blur of funeral plans, contacting people and organising the wake. One the Wednesday, my brother and I went to Bairnsdale to pick up Mr 17 from the train station (which is about 45 from Orbost). We had just left Newmerella when a combi van swerved onto our side of the road, went off the side of the road, bounced a few times and came to a halt in a ditch. The van had a lovely olderly couple in it, who were luckily unhurt but I called the police and ambulance for them anyway. They had hit the ditch a few times pretty hard and I am sure their van was a write off. My brother had to pull the lady passenger out through the drivers door, as her side was stuck in the ditch. Scary to think that if I had of been doing the speed limit of 100km/hr ( I had been coming out of an 80 km/ hr zone), my brother and I probably wouldn’t be here. I don’t think my Mazda 6 would go to well against a combi van. I honestly think Mum was looking out for us that day. It was way to close for comfort!Friday, we had a small grave side funeral with a lot of flowers for Mum, she would have liked that. We had a wake at Mum’s and her partners house. She also would have loved seeing us all together and enjoying each others company.  The next day we headed for home, gosh the 5 hour drive is a long one and it was so windy. Mr 17 was keeping me company by sleeping all the way home. Thanks bud!
We finally got to the boy’s Dad’s house and picked up Mr’s 10 and 7. 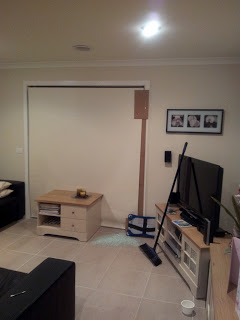 As we drove into our street and I pushed the garage door remote… odd, it only went up a foot from the ground. So Josh scooted under the door and raised it manually. Once inside we found the back sliding door had been smashed and few of my things missing. Most notably my itoys (ipad, iphone and ipod) and my whole jewellery box gone.  Poor Mr 10 had to be held because he was shaking so badly and was continuously saying “I’m scared, I want to go to Dad’s”. I was quickly on the phone to their Dad and to ask him to pick them up. Mr 10 was in shock. I had to give him phenergan to calm him down. After that night he was fine and dealt with it. Mr 7 kept asking questions and wouldn’t let his father or myself out of his sight for at least three days afterwards. But after much reassurance and putting security measures in he was fine. The police came and took photos, finger prints and put together a report. They seemed to think someone had been watching the house. Nice to know one of our neighbours are theives.  O’ Brien glass couldnt come until the Saturday afternoon, so Josh and I made the makeshift cover up (right), consisting of an old Ikea box folded out and lots of tape and then the blind put down over the top with the coffee table in front of it. It did the job and kept the cold out. So last week was busy with sick children, organising the insurance claim, new security doors, fixing up Centrelink stuff ups (seriously, can they ever do anything right?) and then I got gastro on the weekend, which was horrible! I’ve never been so sick in my life. I was feeling better, then the next day I got a PMS migraine, gee thanks body! Anything else you can throw at me while I’m at it? Maybe the plague? haha! Nooo… “Just keep swimming… just keep swimming…swimming swimming”.
So here’s to the next few weeks picking up. We are off on holidays to Queensland soon, can’t wait!

Looking to start an online business?

Most Effective Techniques To Adopt When Drilling In Rock

How Much Does a Trampoline Cost? A Price Guide