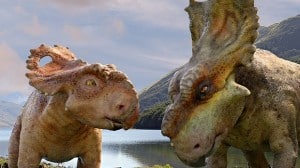 WALKING WITH DINOSAURS is the ultimate immersive, big screen adventure for families. Meet dinosaurs more real than you’ve ever seen as you take off on a thrilling prehistoric adventure, where Patchi, an underdog dinosaur, triumphs against all odds to become a hero for the ages. For the first time in movie history, audiences will truly see and feel what it was like when dinosaurs ruled the Earth.

Walking with Dinosaurs is about dinosaurs in the Late Cretaceous period 70 million years ago and was produced by BBC Earth and Evergreen Films and was named after BBC’s 1999 television documentary miniseries. The production features computer-animated dinosaurs in live-action settings with actors John Leguizamo, Justin Long, Tiya Sircar, and Skyler Stone providing voice overs for the main characters.

What is truly extraordinary about this movie though  is it’s visual achievements. Without a question there have been amazing films made about dinosaurs, and every interpretation of what these long-gone creatures looked like is more impressive and interesting than the next – but since it was based on a documentary Walking With Dinosaurs has one of the most accurate and up-to-date visualizations of what dinosaurs truly looked, and acted like. Don’t worry though, it isn’t all just science, the movie features a loveable story as we follow best friends Patchi, Scowler, and Juniper (three pachyrhinosaurus’) as they grow from babies to adults, struggling all the while to find their footing in the world. Especially Patchi who learns how to become leader of the herd.

Here is the trailer for you:

What we thought: The boys loved it and sat mesmerised for the whole movie. The animation was amazing and incredibly life like. When the boys were little they loved the “Land Before Time” dvd’s and I guess this is an extension of that, only on a larger scale. I liked that the boys were learning as they were watching the movie and the moral behind the movie of believing in yourself was great.

The funny part was when I was telling the boys we were going to watch a movie and they wanted to know where the DVD was. Once I explained it was downloaded like the games on their ipods they thought it was a fantastic thing. Being able to buy movies from itunes or Google play has made it so much easier to keep kids occupied on the go. They can watch movies at Grandma’s, at a restaurant or even on long car trips. Just a tip, if you are going to let children watch things on smart phones or tablets in public, please provide your kids with earphones! Common courtesy to others really. I won’t go on a rant about Dr’s clinics, restaurants etc.

To celebrate the release of Walking with Dinosaurs on DVD, Fox and Mummy of Style and Substance are giving away five copies of the Walking with Dinoaurs DVDs. Entries are open to Australian residents only. Entries close 30th May at 5pm.

Walking With Dinosaurs The Movie is out now on Blu-ray & DVD.
It’s also available on Digital HD through iTunes – which allows you to purchase titles before they’re in the shops.
It also means kids can enjoy the movie anytime, anywhere – great for long road trips!

5 ways to Get Approved

What Is Included In A Contemporary Self-Care Regimen?

4 step guide to help you become a good guitarist!

Checklist For The Ultimate Party