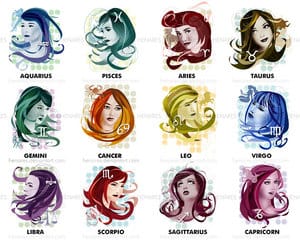 “It’s written in the stars!” which is what people exclaim when good things happen to them. So there must be some good in knowing what is in store for you and your future. Don’t you think?

I must admit I am rather guilty of reading my astrology reports to see what is in store for me for the next month and which dates are ideal for doing certain things etc. After all, It’s in the stars!

I am the epitome of my star sign. Being of  a sun sign Virgo, I am incredibly practical and analytical. The perfectionist, if you will. Which in some ways can be good but in other ways it can be self limiting because you are too busy working out with every small detail is correct, instead of seeing the big picture.

Of course, I am a tad on the OCD side (I can’t stand if things aren’t straight, for instance. My family laughed when we were staying in a hotel recently and I had to straighten a lamp shade in the lobby which was crooked). A clean freak. Workaholic. Helpful. Caring. Loving. Determined and Stubborn. Shy. Extremely picky and won’t settle on the mediocre.

How amazing would it be to predict the right timing of meeting ‘the one’ or getting a better insight to your loved one or your children? Maybe buying a house or going for that all important job?

Elizabeth Ball has done just that. From the age of 16, Elizabeth studied astrology and predicted her friends successes with boys. Later, leading on to writing astrology articles in magazines like Cosmopolitan, Our House and honeymoon magazine Dreams.

In November 2010, Elizabeth’s mother asked her to travel with her to France. Who would pass up that opportunity?

While the tour was to depart from Paris in May 2011, Elizabeth told her Mum they needed to leave Sydney on 24 April 2011 as Elizabeth’s chart indicated she would meet someone hugely significant to her life that very day (yes, it can be that specific)!

Within five minutes of boarding the plane, Elizabeth met an Englishman who seemed strangely familiar and with whom Elizabeth felt she’d known in another lifetime and immediately asked his birthdate so Elizabeth could examine our charts in her LoveStars report!

Within three weeks of her return, the couple arranged to meet for a date in Melbourne where he lived, driving to the Twelve Apostles. Neither of them realised the distance they would be driving(!) but within 12 hours they knew they had a special connection .

Ten weeks later, Elizabeth moved in with him on a New Moon in her fourth house of home and family and they remain happily in Melbourne to this day. The happy couple bought our first home together a year later on the next New Moon, got engaged in January 2013, and married and went on honeymoon in October in 2013.

What a fantastic story! Elizabeth timed all her most important life moments according to her most auspicious astrology dates.

Love where you live. Win a $100 Masters voucher!