This is Where I Leave You follows the newly divorced, newly jobless, Judd Altman (Jason Bateman) as he heads home to his dysfunctional family (who he hasn’t seen in years) after the death of the family patriarchal father. The family consists of Jane Fonder as Judd’s grieving Mother, Tiny Fey as his sister Wendy, Adam Driver as Judd’s little brother, Phillip and middle child, Paul is played by Corey Stoll.

The family are forced by the Jewish custom of Shiva, to endure each other’s company for seven days of mourning, which brings about all member’s of the families secrets falling out of the closet. Mum has her surprising secret, the family finally get to know about Judd’s issues, Wendy is in an unhappy relationship and still loves her high school sweetheart, Phillip has never grown up and Paul has been the responsible one who went into the family business with Dad and is desperately trying to have a baby with his wife…. with all this going on it does lead to some very funny moments.

Here is the trailer to This is Where I Leave You:

Verdict: The casting was a stroke of brilliance.  I am a huge fan of Justin Batemans and this movie was no exception. He was brilliant as the dead pan, Judd, and conveyed everything he was going through perfectly. Tina Fey was amazing as Wendy and you will end up having a soft spot for the youngest brother, Phillip. Jane Fonda is also hilarious as the glue that holds the family together. Apparently, the recently added grieving widow’s “breasts” (which you learn about at the funeral) took two hours in makeup to ‘put on’ Jane’s body. They look incredibly real. 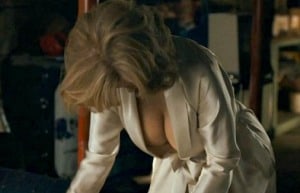 Personally, I think the movie was quite relatable as most families head in different directions and lose contact as they get older. A lot only see each other for Christmas and the occasional wedding, funeral or birthday celebration. Even though I am sure the families aren’t as dysfunctional as the Altmans.

Oh and you WILL need tissues! This movie has a way of making you feel ALL of your emotions in it’s one hour and forty three minutes. One minute you will be laughing, then angry for the character, the next minute you will be crying… the movie does take you on an emotional roller coaster ride.  You will be emotionally rung out by the end of the movie but it is definitely worth the ride.  4/5

How to wear a white shirt 4 different ways