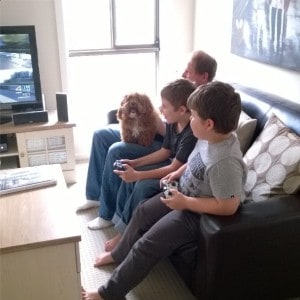 The Xbox One has been a welcome addition to our home, with some online gaming being incorporated into family time. As you can see, even Max the shihpoo enjoys the family time on the Xbox One.

I must admit, we have two other brands of gaming consoles in the house and the Xbox One’s graphics are far superior to the other consoles. The boys enjoy playing Zoo Tycoon, it is a lot of fun and you get to be the zoo keeper. The zoo keeper looks so real, you would swear it was a real person.

Another game the boys (and hubby) are obsessed with is Forza 5, which is a car racing game. The object of the game is to win races and buy more expensive cars to race with the money you win from previous races. Forza 5 is hosted by the guys from Top Gear, Jeremy Clarkson, Richard Hammond and James May, which is great because the males in this house are huge Top Gear fans (ok, yes I find it funny to watch as well). 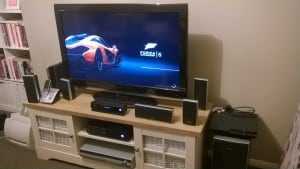 The smaller boys also have Lego Marvels Super Heros game. The game is based on the Marvel comics super heros using Lego minifigures as the characters and even includes the creature of the comic heros and former president of Marvel, Stan Lee.

Another game the boys enjoy is the Rayman Legends game, I don’t understand it but the laughing coming from the living room when the boys are playing it sounds like it is a lot of fun and funny to play.

My favourite part of the Xbox One (other than Xbox fitness) is Xbox Music, which gives you access to millions of songs to stream for free and is like Spotify or Pandora. It sounds amazing running through the home theatre system. Plus Xbox Music can be accessed via my Windows phone or my Kira Notebook .

Hundreds of games and apps are easy to download from the Xbox One store or physical games can be purchased at most gaming stores like EB or electronics stores like JB HiFi.

Combantrin saves the day and our sleep!

Need A New Car? Here’s What You Should Do