I was very excited to be invited to the Maxted Thomas PR blogger event, which was held in Sydney on the 25th July.
My day started by waking up at 6am, which would of been fine if I had of set my alarm for 6am but it was set for 5am and didn’t go off….aaarg! So to say that I was running around, like the opening scene in Four Weddings and a Funeral (swearing included. Although, it was the ‘S word’ and not the ‘F word’), would be an understatement! I had a quick shower (so much for washing, drying and straightening my hair!), put my hair up in a sleek ponytail, got dressed and rushed out the door. Phew… got to the airport with time to spare! 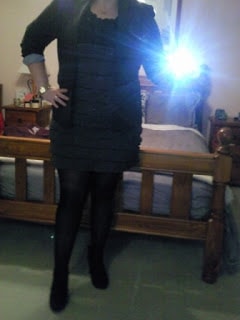 This was my outfit for the day… loved this outfit!
The day was to get a lot better though, I was given a seat over the wings/ emergency exit, ahh leg room (which is great when you are 5’9 with long legs, I can tell you!). Thank you, Qantas! Two coffees and a quiet 1.5hrs was bliss!!
Get to Sydney at 9.30 and meet up with my partner in fabulous girly fun for the day, the gorgeous Nikki from Styling You.
We caught a taxi to the fabulous Sam from Sassi Sam ‘s place, we then headed off to a yummy brunch in Coogee (love the beach there, beautiful!).
Off to the Benefit Boutique to get primped and preened. We finally got there once the taxi driver got his sat nav working and Nikki had to tell him the address about ten times…. eek… I thought all Sydney taxi drivers had to know where they were going?!? Being from Melbourne and the Sunshine Coast, we had no idea where we were or how to get where we were supposed to be going to, so it would of been interesting if he couldn’t get us there. We got there in the end, so that is the main thing 🙂 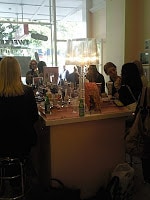 I was bowled over by how gorgeous the Benefit Boutique in Paddington was! I was in heaven! It is very much like Benefit’s pretty packaging, very girly and vintage chic. We REALLY need a Benefit Boutique in Melbourne, I think I would be there quite regularly. I love Benefit products! 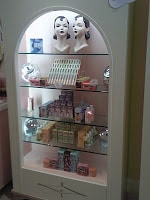 As soon as we walked in we were greeted by the lovely, Katrina, who is the marketing manager for Benefit. Katrina explained to us that we could have the works done. Brows, tinting, fake lashes, make up… everything… *squeal! I truely was in heaven, I’m sure of it now!
All of the Benegals were lovely and couldn’t do enough for us. Feeling quite spoilt, we were offered sparkling water and there were cute cupcakes and nibbles to snack on. I didn’t get a chance to nibble though, as there was so much to do! 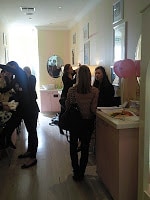 My first stop was the brow bar (right).
Nikki and I had the full works on our brows, including a tint and wax. My brows have never looked so good (see below right). I chickened out of getting false lashes, as one of the other girls had her eyes running from being sensitive to the lashes and since my eyes play up with anything near them, I decided to give them a miss. I have fairly long lashes anyway, so I wasn’t too worried about missing out. On to the make up bar and had my eyes done and make up refreshed. I love the Benetint lip gloss! 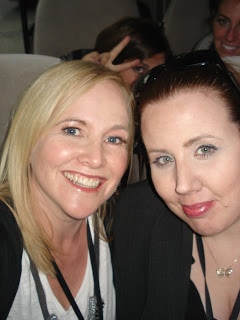 We were all made over and it was time to hop on the rainbow bus (yes, the taxi bus had rainbows on it, was very pretty!) and head to the event which was being held at Brad Ngata’s Hair Directions salon in Surry Hills.
Showcased were Brad Ngata, Benefit, Orly, Nivea, Jane Iredale , Elastoplast and Trilogy. Each company had an area of their own in which you could find out more about their products, try them and receive samples. 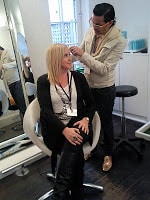 Brad Ngata showed us how to make curls and volume using a straightener on Melissa (from Maxted Thomas)’s hair, then straightened Nikki’s hair (left).

It was a fantastic opportunity to learn the tricks of the trade from one of Australia’s top hair stylists. Brad has worked with many celebrities and VIP’s. 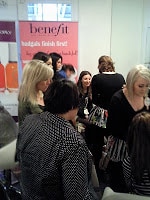 < The Benefit ladies working their magic.It was exciting to learn how to use the Benefit range and find out what is being released shortly (I will tell you all about it in a seperate post). 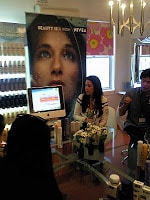 > The Nivea team tell us all about their products and their new sun range. I am going to review the new range shortly, so keep an eye out for that.
Jane Iredale is a mineral make up company which has the most gorgeous range of make up, the colours are beautiful. Also very good for your skin and certified organic.

Trilogy is also one of my favourite brands, I love their Age Proof range. We have news about a new campaign, which helps one of our endangered species and new products which I will post about later.
Orly have a gorgeous new pastel colours range coming out for Spring/ Summer 10.
Before I knew it, it was already 3pm and time for me to head to the airport. I said my good byes to everyone and went on my way. I was very happy to get a lovely taxi driver who knew where he was going. He was a retired engineer who was driving taxis for a bit of extra money on the weekends. I love it when you get a nice taxi driver you can chat with.
I got to the airport, changed my shoes (thank gawd I put my ballet flats in my bag! For one, you can go through security with no worries and two, my feet were killing me!), got my ticket and went through security.
I was worried I wouldn’t pass security at the airport with all the goodies we received from the event. I had to text Nikki to let her know the goodies were ok to get through security with… that’s how many we received! It was like Christmas!
I did a bt of shopping at David Lawrence and Witchery while I was waiting, saw a nautical navy stripe top I’m going to buy next time I am in there!
Waiting at gate 4 there was an announcement for those waiting for my flight to go to gate 2, uh oh! I knew something was up but nothing else was mentioned until we were on the plane and waiting to take off. The flight attendant then informs us that since we had to change planes, we were waiting on the food caterers to stock up the plane and then we can take off. OK, that’s fair enough but when it was time for dinner to come around we were offered beetroot chips (a healthy version of potato chips) and apples but we could have alcohol for free…erm yay.. if I wasn’t starving! All I had for the day was some scrambled eggs for brunch and a ribbon sandwich at the event, I was expecting Thai chicken for dinner not chips and apples. I’m not amused that the ‘catering’ took over half an hour and all that was on offer were chips and apples and then try to get us drunk so we will be ok with it. Let’s just say that Qantas received a compaint email the next day. I expect that kind of service from Jetstar, not Qantas!
I ended up having to get a fillet of fish from McDonalds on the way home…. yay me! lol
All in all, I had a fantastic day and the PR event was a huge success.

Choosing the Right Leggings for Yourself

5 Online Jewellery Shopping Mistakes and How to Avoid Them